The Penguin In The Room 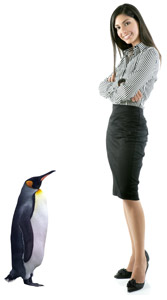 If you follow the ever changing world of Search Engine Optimization (SEO) and Google’s ongoing “bettering” of their algorithms to provide consumers with the most relevant search results, you have probably heard of the ongoing analysis and discussions caused by Google latest algorithm change, The Penguin.

Google first announced this change/update on April 24, 2012 with hopes that this update will “decrease search engine rankings of websites that violate Google’s Webmaster Guidelines by using black-hat SEO techniques such as keyword stuffing, cloaking, participating in link schemes, deliberate creation of duplicate content and others.”

Based on the initial numbers, the first Penguin update only affected 3% of English search results. But on May 25th, 2012 Google announced another Penguin update (Penguin 1.1) that was “supposed to have impacted less than one-tenth of a percent of English searches.” However, based on the overall uproar and disarray in the world of search engine optimization, I can unmistakably say that it seems that more than 4% of the overall searches have been affected by both releases.

What exactly did the Penguin update change? It did exactly what Google indented for it to do: it cleaned up search results by decreasing rankings of websites that used black-hat SEO techniques to gain rankings in the past. Meaning, if a website used techniques from Google’s “unapproved” list of SEO methods, the Penguin releases targeted these websites and penalized them by decreasing their online rankings. The upside is that many websites using approved SEO tactics have seen a rankings boost as the unapproved sites are pushed down in rank.

With this change the algorithms now look more closely at the quality of content on the website and use of white-hat SEO techniques. As expected, this update also increases the importance of Social Media strategies into the SEO mix. Furthermore, the update reaffirmed the importance of new and relevant content additions to the websites, which basically emphasizes Blogs Interfaces as one of the vital parts in future of SEO strategies.

Despite of the overall market uproar about the release, in most cases only the individuals who practiced unfair black-hat SEO techniques got affected by the update. In keeping with Google’s true intentions, I hope the team will continue to improve their algorithms and provide users with truly valuable content that increases the organic search engine rankings of companies and websites that actually provide relevant website content and follow Google’s white-hat SEO guidelines.