The Bing Challenge - The Force of Habit 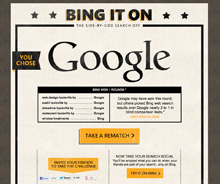 It has been hard to miss Bing's ongoing marketing campaign of the "Bing It On Challenge" launched earlier this fall. In attempts to take market share from Google, Bing's challenge lets users vote on a blind search result test of 5 queries of their choice. Upon completion of the searches, the results display your selection for each query and your overall search engine preference.

With over 5 million visitors to the study page (note, not necessarily 5 million surveys) Bing is now claiming that "people chose Bing web search results over Google nearly 2 to 1." Impressive claims, but the true question is, will these claims and user preference lead to any behavior switch for the users and increase Bing's market share?

Here are the facts. Many years of marketing research and human behavioral study have shown that it's hard to switch human behavior from the force of habit. With Google currently holding 86% of the global search engine market it seems like a good chunk of users to go after. However, Google didn't lose any traction in its growth and in fact has gained market share since the launch of the Bing's new marketing campaign.

Over the last decade, Google has proven to its users to deliver a quality search results that users trust and prefer. In Google's humble beginnings (if there were ever such as thing), the company's origins started as a quality search engine with mission of a better product, better user experience and better results geared toward the masses. Google had to overcome the uphill struggle of being the new guy who went after Microsoft/Bing (then MSN Search) and Yahoo search engine market shares with nothing to start. Basically, they grew their market share by converting those who were already accustomed to doing online searches with other search engine and new emergent users of the web.

Initially, before Google's popularity, everyone was using MSN/Bing or Yahoo, simply by the fact that lots of individuals had Hotmail and Yahoo email accounts and therefore used the default search engine on their home screen. But due to the number of unsatisfactory searches and a promise of a better experience, everyone started to consider a better search engine option - Google. Today, while user preference and habits lie with Google, Bing is making their new promises: promises that they failed to deliver on for over a decade. Will the public trust their new promise of a better experience or will the bitter taste of the initial days under Microsoft prevent users from switching to Bing?

And what about the users who never experienced the bitter sweet days of a Microsoft search? Today, those users are part of Google's market share. Habits die hard and so does the experience with a better product. If Google continues to perfect their search result as they have been doing since the beginning and doesn't' start to clutter up their search result screen, users will not switch to other search engine and continue to use Google. Even if Bing can deliver marginally better results, few people would say that Google isn't "good enough", especially if that's what they're used to.

Having said all this, I still give props to Bing for trying.